The project will bring forward delivery of 500 new homes including one and two bedroom apartments and two, three and four bedroom houses, with demolition work to begin on the former commercial brownfield site in April.

The works will involve the redevelopment of 16.8 acres of the previously developed brownfield land which is currently occupied by number of industrial and commercial buildings including the DCS warehouses, Morgan Sindall office and Ragdoll television production facility. 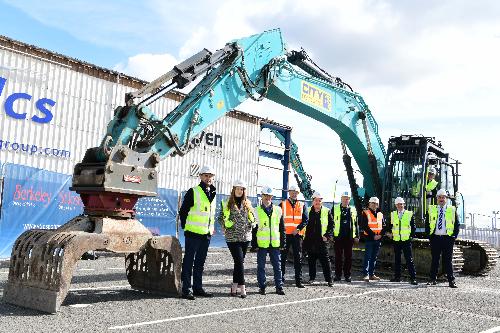 A defining feature of the new development will be the key public space of Timothy's Bridge Green, that will be delivered within the first phase and will connect to the new linear park that will enliven and invigorate this stretch of the Stratford-upon-Avon Canal by enhancing public access and movement throughout the area.

Cllr Anne Parry, Development Portfolio Holder says: "This is a significant development for the area and we are looking forward to St Joseph Homes delivering a high-quality development in this part of town. The project will create jobs, enhance biodiversity and celebrate the town's waterway."

"The new development will offer quality homes to families, professionals and those looking to live in the sought-after location of Stratford-upon-Avon.

"Alongside the creation of new jobs for this development, the regeneration of the brownfield site will boost the biodiversity of Stratford-upon-Avon's Canal Quarter, while also providing commercial office space for businesses and help to drive the local economy."

Cllr Tony Jefferson, Leader of Stratford-on-Avon District Council said: "This is a major milestone in the redevelopment of the Canal Quarter. The quality of this development will set a benchmark for others and we are very pleased to be working with St Joseph Homes on this redevelopment.

Following the demolition work, construction of the new homes is set to begin at the start of 2023, with an expected completion date of 2030.

St Joseph Homes Ltd is a West Midlands based property developer inspired by the transformational civic improvements delivered by Birmingham's 19th century mayor, Joseph Chamberlain. The company shares his belief that an inspiring public realm is the cornerstone of a happy, thriving community and its commitment to delivering the best for local people will lie at the heart of everything St Joseph does. The newest brand to join FTSE 100 Berkeley Group, St Joseph brings formidable expertise in securing and delivering the best outcome for each site it takes forward. Developments will range from traditional housing to complex mixed use and city centre apartments.