On the 19th April Stratford-on-Avon District Council approved the Earlswood Public Space Protection Order at a meeting of Council. The Order is now live and will become enforceable from the 1st of May 2021. The Order will last for three years and be in place until 1st of May 2024.

What is a Public Space Protection Order (“PSPO")?

The Anti-Social Behaviour, Crime and Policing Act 2014 introduced Public Space Protection Orders (PSPO's). PSPO's are used to protect the public from behaviour that is having, or is likely to have, a detrimental effect on the quality of life of those in a locality and which is (or is likely to be) of a persistent or continuing nature, and unreasonable. Councils can make PSPO's to prohibit specified activities, and/or to require certain things to be done by people engaged in particular activities, within a defined area.

Stratford-on-Avon District Council (“the Council") works in partnership with many statutory partners, including Warwickshire Police, the Police and Crime Commissioner and local councils, to prevent crime, disorder and anti-social behaviour (“ASB"). Over the last three years, the Council and Police have received an increasing number of reports from residents regarding criminal and anti-social behaviour in the Earlswood Lakes area of Warwickshire.

The behaviour reported to the Council and Warwickshire Police includes;-

The Council have held discussions with Warwickshire Police regarding the criminal and anti-social behaviour taking place in Earlswood, to look at the best way to tackle it. From these discussions, the Council believes that a PSPO is an appropriate and necessary tool for local agencies to reduce incidents of those listed above.

Who was consulted on the Order?

The formal PSPO consultation was launched on the 20th November 2020 and ran until the 8th January 2021. 146 respondents completed the consultation. The consultation was conducted using a various methods including an open online survey, letters sent to all residences within the proposed area of the Order, promotion through social media/SDC webpages and physical posters in the area.

In summary, the public, businesses and organisations who completed the consultation were overwhelmingly (98%) in support of the Order. A number of key stakeholders were consulted including Warwickshire Police, Tanworth-in-Arden Parish Council, Warwickshire County Council, Canal and River Trust, and the Warwickshire Police and Crime Commissioner and Earlswood Residents Association. All stakeholders were in support of the proposal to introduce a PSPO for Earlswood.

A range of sources were used to gather evidence on the issues within Earlswood, including Data from Warwickshire Police, Stratford-on-Avon District Council, Tanworth-in-Arden Parish Council, the Canals and River Trust.

Following the official consultation the Order was considered by Stratford-on-Avon District Council at the following:

What are the Order Conditions?

The approved PSPO now prohibits certain specified behaviours within the restricted area which are summarised below:

1. Psychoactive Substances (Part I) - A person commits an offence if they possess or consume a psychoactive substance.

3. Loitering (Part III) - A person commits an offence if they are loitering and causing, or are reasonably perceived to be causing (or likely to cause), intimidation, harassment, alarm or distress to another person.

4. Alcohol Consumption (Part IV) - A person commits an offence if they fail to cease drinking alcohol or to surrender the alcohol when directed by a constable or authorised person. People may still drink in public places, but if they are causing anti-social behaviour they will be asked to stop drinking or to surrender their alcohol.

Full wording of the conditions is available in the Order (attached to this page). The conditions of a PSPO apply to everyone who uses any public spaces within the restricted area. Anyone who, without reasonable excuse, fails to comply with the Order or to a requirement given to them by a Police Officer, Police Community Support Officer or authorised officer commits an offence.

What are the Penalties for those breaching the conditions?

A person who commits an offence in breach of the PSPO conditions may be given a Fixed Penalty Notice of up to £100 (£75 if paid within 10 days). If a person fails to pay a Fixed Penalty Notice they may be issued with a Court Summons where, upon conviction, the following fines may be incurred: Breach of alcohol restriction up to £500 or Breach of other requirements up to £1,000.

What is the area to be covered by the PSPO? 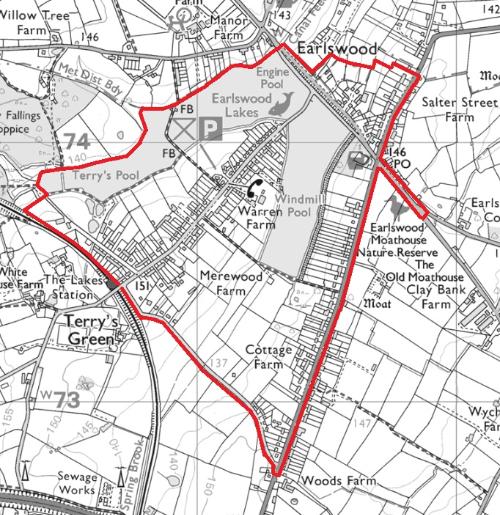 The boundary of PSPO covers the Warwickshire side of Earlswood (see map above for defined area).

How To Pay a Fixed Penalty Notice

You must pay the Penalty Notice within 14 days of the date of issue. If you pay within 10 days of the date of issue, the penalty notice will be reduced to £75. If you or anyone else choose to pay the penalty within 14 days, no further action will be taken against the person named in respect of the specific offence committed. Payment can be made by credit or debit card by telephoning 01789 260979 quoting your ticket number, or online at https://www.stratford.gov.uk/payments/

If you fail to pay within 14 days you may be charged with an offence and summoned to appear before a Magistrates' Court to answer charges relating to the offence. The maximum fine upon summary conviction ranges from £500 - £1,000 for Public Spaces Protection Order offences.

If you require a paper copy of the documents or wish to discuss this further, please either: