Cabinet at 9 AM - Agenda

Two icons of British film and theatre had the ancient honour of 'herding sheep' in Stratford's streets after they were given the freedom of the town in a special ceremony.

Dame Judi Dench and Kenneth Branagh, Kt were granted the honour at an unveiling of the town's restored David Garrick statue of Shakespeare as a preview to the Bard's birthday celebrations.

The statue, donated to the town by Garrick in the 18th century, had been taken away to London for much-needed restoration work after a project led by Dr Paul Edmondson from the Shakespeare Birthplace Trust called 'Shakespeare's Coming Home' helped raise part of the £45,000 needed to restore the statue. 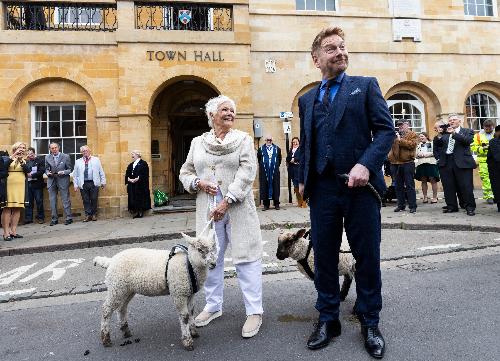 In ancient times, 'Freemen' of Stratford-upon-Avon were given the right to herd sheep along the town's streets as they pleased.

So just after their freedom was conferred and the statue was unveiled, the Oscar-winning pair exercised those rights by leading a couple of sheep along Sheep Street, much to the delight of the watching public.

Dame Judi Dench said: "It was absolutely wonderful to receive the freedom of Stratford-upon-Avon, and I very much enjoyed exercising my rights by herding the sheep along Sheep Street.

"Stratford has been the place nearest to my heart, not only for work but for my family and friends, so I felt very honoured to be given the freedom of this wonderful place."

And Kenneth Branagh added: "Unveiling the restored David Garrick statue was the perfect way to start the Shakespeare Birthday Celebrations in Stratford-upon-Avon.

"I have to thank Stratford Town Council for giving Dame Judi and I the freedom of the town. It's been a huge part of our lives for so long, and it was fantastic to share the occasion with so many people."

And Kevin Taylor, Mayor of Stratford-upon-Avon, said: "Having Dame Judi Dench and Kenneth Branagh here to unveil the restored statue was just fantastic.

"They have played such an important role in promoting Shakespeare and Stratford over the years, so they fully deserved their new honours as 'Freemen' of Stratford.

"And they loved exercising their rights by leading the sheep along Sheep Street, which spectators loved too. It was such a fantastic occasion for Stratford and we're delighted that their names will remain on the honours board in perpetuity!"

Dame Judi Dench has starred in many Shakespearean performances at the RSC and the National Theatre across a career spanning decades, and won an Oscar for her role in Shakespeare in Love in 1998.

And Sir Kenneth Branagh has acted and directed in a host of Shakespeare plays and film adaptations, receiving widespread acclaim across his career.

His latest film Belfast earned him an Academy Award for Best Original Screenplay, and the BAFTA for Outstanding British Film.