We currently have a vacancy for an Independent Person. For more information please see our current vacancies page.

Following last week's decision by Stratford-on-Avon and Warwick District Councils, a formal submission document has now been sent to the Secretary of State for Levelling Up, Housing and Communities, Michael Gove MP, to request his permission for a full political merger to create a South Warwickshire District Council. 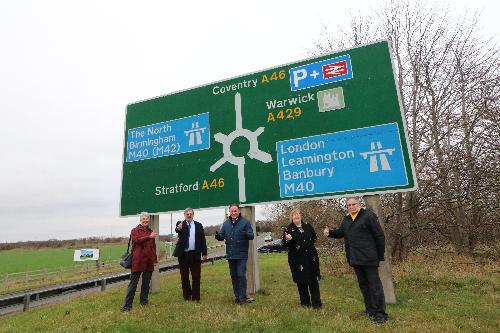 To mark this historic event group leaders from across the political spectrum gathered at the Longbridge Island, which borders both districts and is a well-used crossing point.

Councillor Andrew Day, Leader of Warwick District Council said: "This is a momentous day for both authorities and I am proud and delighted that Councillors have given their overwhelming backing for us to start this journey together to build a strong and agile Council to serve all our residents. We are optimistic that if agreed this will lead to a bright future for local government in South Warwickshire."

Cllr Tony Jefferson, Leader of Stratford-on-Avon District Council said: "There have been a lot of changes in the almost 50 years since both District Councils were created. We need to adapt to a changing world. Both sets of Councillors recognised this. With this decision taken a lot of hard work will now begin to ensure the success of South Warwickshire and deliver benefits for residents. Exciting and challenging times ahead."