On Wednesday 19 May, Stratford-on-Avon District Council held its Annual Council Meeting where Councillor Tony Dixon handed over the chain of office to Councillor Edward Fitter.

During his term of office (September 2020 - May 2021) Councillor Tony Dixon (Tanworth-in-Arden) nominated The Shakespeare Hospice as his Chairman's charity, and they will receive a donation of £2,195. 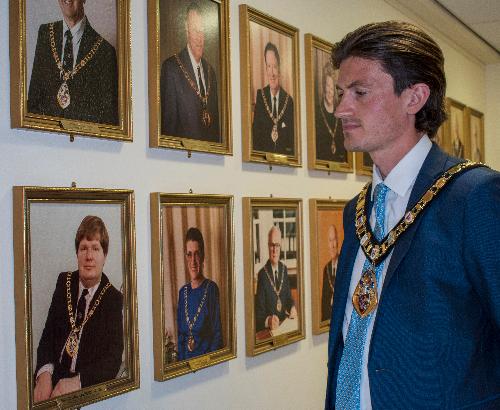 At 27 years old, Cllr Edward Fitter (Quinton) becomes the youngest Councillor at the District Council to hold the position of Chairman, a record previously held by Sir William Lawrence who was 35 years old, when he was first appointed in 1990.

Cllr Fitter has chosen Lifespace, Stratford-upon-Avon, a charity mentoring young people and helping them to achieve more, as his Chairman's charity for the year.  He will also be supporting the Heart of England Forest to help take care of our woodland and to plant more trees.

Cllr Fitter said of his appointment: "It is a great honour to have been elected as Chairman of the District Council and I am proud to be an ambassador for the Council.

"We have all just gone through a very dark and uncertain winter, but we witnessed the love and courage that makes our communities so special. I am confident that our District will thrive and prosper again.  I'm looking forward to the restrictions lifting and having the opportunity to meet with residents and representing the Council at civic events."