Stratford Town FC is gearing up for the new season after dealing with some unexpected pitch invaders during the lockdown period.

With new COVID-19 safety measures in place around the ground at Knights Lane, it is hoped the club can start playing league matches and welcoming fans once again in September.

And a Discretionary Business Rate Grant from Stratford District Council, along with further funds from the Football Foundation, has helped the club financially after its revenue took a serious hit when lockdown was enforced.

But without a confirmed start date for the 2020/21 league, Stratford Town's future is still uncertain.

He said: "Overall, we've been pretty lucky when it comes to how much we've been affected by the pandemic.

"I think we've used the time wisely - our volunteers have redecorated our changing rooms and bar, made repairs to the ground itself, and have made sure hand sanitiser is everywhere for when fans return. We can certainly obey social distancing in crowds - our capacity is around 3,000 but we only tend to get 300 for a normal league game. Happily, some of our sponsors have stuck by us through signing new deals. And the grants we've received from Stratford District Council and the Football Foundation have been crucial to keeping us going."

Keeping the pitch in good order during lockdown was a real challenge - Mark had to make sure animals like badgers and foxes were not damaging the surface. 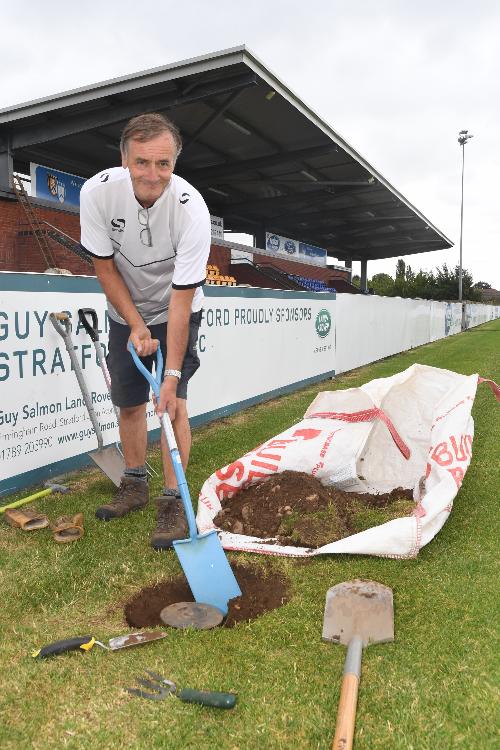 In one unfortunate moment when dumping grass away after mowing the pitch, Mark inadvertently disturbed a bees' nest, receiving plenty of stings for his troubles.

"Looking after the ground during lockdown has been interesting to say the least," Mark added.

"Without humans to disturb them, all sorts of wildlife appeared to take advantage of this lovely green pitch.

"It was actually quite nice to drive over to the ground without seeing any cars on the journey and working on the ground being able to hear clear birdsong for once."

But Mark is now focussed on making sure next season can start without a hitch. Provisionally, the first matches in Stratford's League, the Southern League Premier Division Central, start on September 19.

Mark said: "A lot will depend on whether this year's winter is bad or not. We'll be starting the season about five or six weeks behind, so we can't really afford for many games to called off through bad weather.

"But we're as ready as we'll ever be. The staff, players and fans just want football to be back again. We honestly can't wait."

Businesses are being now supported by Stratford District Council to promote the safe reopening of the High Streets in response to Covid-19 through the Government's Reopening High Streets Safely Fund which is funded by the European Regional Development Fund (ERDF).

The project has received £116,036 of funding from the England European Regional Development Fund (ERDF) as part of the European Structural and Investment Funds Growth Programme 2014-2020.

The Department for Communities and Local Government is the Managing Authority for ERDF. Established by the European Union ERDF funds help local areas stimulate their economic development by investing in projects which will support innovation, businesses, create jobs and local community regenerations. For more information visit https://www.gov.uk/european-growth-funding