The annual Mop Fair returns on Friday 11 and Saturday 12 October, bringing one of the biggest and brightest street fairs in the country to the heart of Stratford-upon-Avon. 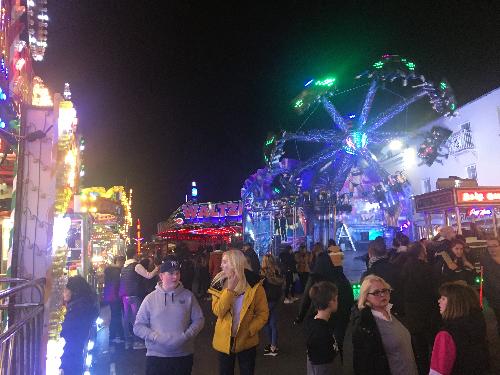 This Mop has a tradition of up-to-date and exciting attractions, as well as traditional family favourites such as the 127-year-old Golden Carousel, which will be positioned again in Rother Street.

Many of the attractions will be located on Bridge Street, where the Tornado will be a new ride for 2019. Swinging high towards the town's historic rooftops, the attraction is definitely one for the thrill seekers! Back for a second year by the American Fountain, towering a massive 40 metres (130 feet) high, will be Mission Space.

The event begins at 4pm on Friday. Then the Mop is officially opened on Saturday at 11am by The Chairman of Stratford-on-Avon District Council, Cllr Christopher Kettle.

There will be the traditional Pig Roast, provided by local Scouts at the end of Waterside / bottom of Bridge Street, on the Friday with the charity auction on the Saturday

One of the biggest changes to the rides and attractions in recent years has been the integration of eye-catching LED displays, which really come into their own as the nights draw in at this time of year. Miraculously, these super bright lights actually consume far less power than the old style filament bulbs they replace.

The Mop Fair's renowned atmosphere, with the streets of the town buzzing until its 11pm closure each night, is part of what makes Stratford-upon-Avon unique.

But why is it called the Mop? The event has an historic tradition. The original Charter for the fair was granted by Edward VI on 28 June 1544. The event has its origins in the hiring of agricultural and domestic labour, when potential labourers would attend with a mop to signal their skills.

In the 1950s, during the prominence of railway travel, special trains were laid on to ferry people from surrounding towns and villages to and from the fair.

The use of public transport is still encouraged today, however parking is available around town for those who prefer to arrive by car.

Stratford also has an associated 'Runaway Mop' which takes place two weeks later on Friday 25 and Saturday 26 October. This tradition is derived from the need for employers to reconsider and re-hire any staff before committing to a full year's work. Today it exists as a pleasure fair with a smaller selection of attractions clustered around Rother Street.

The District Council and Bob Wilson's Fun Fairs are very grateful for local people and businesses assistance and co-operation in making the operation of the Mop as trouble free as possible. Here's to a safe and enjoyable fair for everyone!

More information about the Mop Fair will be provided in the run up to the event at www.Facebook.com/StratfordMop

Stratford-upon-Avon road closures during the Mops

To accommodate the Mop the following streets in Stratford-upon-Avon will be closed from 5am on Friday 11 October until 7.30am on Sunday 13 October:

The following streets will be closed from 5am on Friday 25 October until 6am on Sunday 27 October to make way for the Runaway Mop:

The District Council appreciates these closures of town centre streets can cause problems with access for vehicles and parking during this time, but the road closures will be strictly enforced.

For further information about parking in the town please visit: https://www.stratford.gov.uk/parking-roads-transport/car-parks.cfm