A celebration that honours the birthday of The Bard and all his work has been hailed a huge success after it went online for 2021.

Since it premiered on April 23, the video special has had a total of 1,856 views and is still available on YouTube for people to watch.

The event went online this year to be able to mark William Shakespeare's birthday safely due to the Coronavirus pandemic and to avoid attracting large crowds. 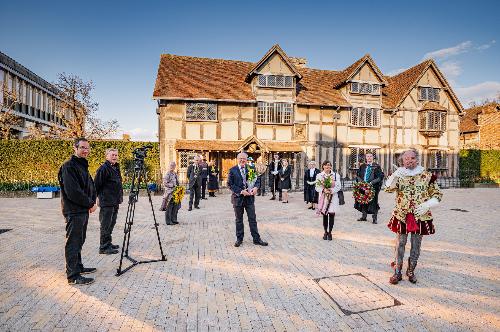 A special film was created and featured the usual programme that would normally happen including an appearance from Mr Shakespeare along with the Mayor of Stratford, and dignitaries and viewers were able to see the 'Cradle to Grave' pilgrimage from Shakespeare's Birthplace Trust to Holy Trinity Church.

There were also stops along the way at New Place and King Edward VI School where the handover of the quill to the Head Boy or Girl takes place - showing the Bard's legacy is being passed on.

The video also included the usual playing of the national anthem, fanfare and flag ceremony as well as flashbacks to previous events and readings of Shakespeare's work.

Sarah Summers, Town Clerk at Stratford-upon-Avon Town Council, was happy that the day could be marked properly, even if it was not in person.

She said: "We could not be more pleased with how the video turned out for this year's event, it may not have been the same as when we are all in person, but we were able to do the most important thing and that was honour the birthday and life of William Shakespeare.

"We would like to say a huge thank you to everyone who helped in the creation of the video, this could not have been done without you.

"But we would also like to say thank you to everyone who has taken the time to watch the video as well, it is a fantastic showcase for our town and we hope everyone enjoyed it."

Cllr Tony Dixon, Chairman of Stratford District Council, added: "Watching the video demonstrated just how special the celebrations are and how much joy the event brings to the town every year.

"It always brings everyone together and is just such a fantastic event. The video was the perfect way to honour The Bard's birthday safely, but I cannot wait to do it again in person.

"So now we look to 2022 and making it a huge spectacular and a celebration back on our streets again and we hope to see the same numbers that traditionally attend the day."

For those who haven't seen the video yet, visit www.shakespeares-birthday.uk to be directed to the online celebrations.