Garden waste subscriptions for the period of April 2022 - March 2023 are not yet open and are anticipated to open late February 2022.

The online subscription for 2021/22 are now closed.

Stratford District is resorting to medieval methods to help local people find work after the pandemic had a huge effect on the job market.

The Stratford Mop Fair, which is held each year in Stratford-upon-Avon town centre, usually consists of a funfair for the district's residents to enjoy.

But when it started in the 14th century it was used by landowners around the county to meet prospective workers after the Black Death had decimated the population.

Now - in the wake of the Covid pandemic - the first ever 'Job and Apprenticeship Fair' will be held at the Stratford Playhouse in Rother Street to attract workers to fill the many shortages in the prominent hospitality and leisure industries in the district, as well as in several other sectors.

A host of employers and local agencies will be on hand at the free, one-day event on October 12, to speak to would-be staff members, and more are being booked ahead of the fair.

Cllr Matt Jennings, portfolio holder for Tourism and Economic Development at Stratford District Council, said: "The Mop Fair has been a staple in Stratford for a very long time, but it's been many years since it fulfilled its original purpose of recruiting people for work.

"With the pandemic having had a significant impact on businesses in Stratford District and beyond, we thought bringing back old traditions and hosting a Job and Apprenticeship Fair would be a great way for businesses looking to hire to meet people looking for work.

"We'd love to see plenty of people come down this year to not only enjoy the amazing funfair, but to potentially find a new job too."

The Mop was so named because those looking for work would wear an item on their lapel showing what trade they were interested in - such as an ear of corn for farm work - which was known as a 'mop'. 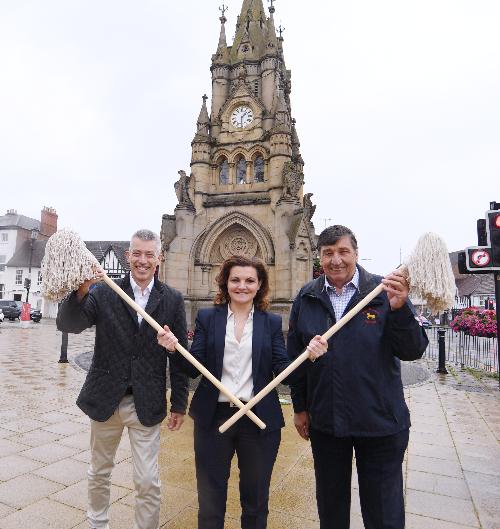 Kate Varvedo, Senior Marketing & Commercial Manager of Shakespeare's England - the leading Destination Management Organisation for South Warwickshire and the surrounding area - added: "Tourism and hospitality are two industries that have been heavily affected by the pandemic, and Stratford's economy has a high proportion of businesses in these two sectors.

"We need to do all we can to help these sectors recover as we emerge out of the pandemic. Bringing back the old traditions of the Mop Fair is a really fun way of helping businesses in the town find the staff they need and ultimately help the region's economy bounce back."

The traditional funfair will still take pride of place at the Mop Fair alongside the recruitment event, with plenty of rides and sideshows for visitors.

It is the second year the event has been impacted by Covid - a single ride was used last year just to ensure the tradition continued, the first time such a measure had been introduced since the Second World War.

Willie Wilson, of Bob Wilson's Funfairs, said: "It's great to be bringing the Mop Fair back at its full capacity after having a tiny fair last year to keep the charter to host the fair alive.

"Our family has been providing the rides and attractions at the Mop Fair for generations, and we were genuinely worried about its future last year, so we're really happy to be bringing it back once again.

"Whether you're coming to the Mop Fair for the rides, or to find work, it's going to be a fantastic event this time around."

The Mop Fair will be held on Tuesday, October 12 from 11am to 11pm, and will be formally opened by the Chairman of Stratford District Council Cllr Edward Fitter.

Anyone looking to take part or for further information should email recruitmentfair@stratford-dc.gov.uk