The ceremony at Stratford Play House celebrated the sporting achievements of clubs and individuals across the District and recognised the valuable contributions made by volunteers, parents and coaches. The event was hosted by Iwan Thomas MBE.

Tom Abbott of Stratford Cycling Club won the Coach or PE Teacher Award. Tom coaches four groups of juniors and is an inspiration to everyone at the club.

The Junior Sports Person Award was presented to shot putter Lewis Byng of Stratford Athletic Club. Lewis became the first UK athlete to reach a European U20 throws final since 1989 when he represented GB at the European Championships in Sweden.

The Junior Para-sports Person Award was won by Sophie Evans-Lee (Riding for the Disabled & Gemini Dance Studio). Sophie became Miss Freestyle 2019 in her category and two weeks later at the Winter Gardens in Blackpool, she won the British Championships. She won the Countryside Challenge at regional level and finished 12th at the national championships,

The Unsung Hero Award was won by Jemma Moore for her huge contribution to netball in the district. Jemma is coaches and umpires for her club, Shooters Netball Club, and set up a summer league in Shipston-on-Stour in 2019.

The Senior Team Award winners were Stratford Cricket Club. Their dramatic victory in the Sunday Smash one hundred ball competitions at Edgbaston was the highlight of the club's year, and its first silverware since 2003.

Ryan Alexander, a student at Southam College, won the Everyone Active 'Positive Change' Award, recognising the sterling work he does as a coach and official across a number of sports. Ryan has also been involved in fundraising for charity and also finds time to be a successful sportsman, most notably in rugby league and karate.

The Senior Sports Person Award was won by Maria Giordmaina following her stellar year of bodybuilding success at international level. Maria became the UKDFBA Masters Fitness champion and went on to win the WNBF World Championship title in New York

The Getting Stratford-on-Avon Active Award went to Stratford-upon-Avon parkruns. The weekly Saturday and Sunday (junior) events attract runners and walkers to the Recreation Ground to enjoy exercise in an inclusive, encouraging and sociable environment. The two core teams of volunteers have worked hard to ensure that everyone feels welcome to take part.

The outstanding results of Stratford Athletic Club Under-15 Track & Field Team at the Warwickshire Championships meant they were presented with the Junior Team of the Year Award, in what was a very competitive category. The contributions of the Under 15s athletes were the key factor behind the overall club wining the Warwick Vase for the fourth consecutive year.

Stratford Town FC's facilities play host to large spectrum of activities and events within the community and its academy, provides a pathway for 16-18 year old to receive coaching from UEFA licensed professionals, play in a national League and move up the ranks to the 1st team squad.

Kineton Sports & Social Club is at the heart of the village and operates a number of outdoor sports and many indoor activities. The club also acts as the hub for a number of cyclists. As a community club it holds many events designed to bring people together.

The prestigious Outstanding Contribution Award went to David Taylor for his commitment to Alcester Town Football Club over a number of years. David has been the Chairman of the club for the past six years and has overseen the first team rise from Division Three of the Stratford Alliance to Division Two of the Midland Football League during his tenure. He is amongst other things the team kit and laundry man for the adult sides as well as the Facilities Manager for the Stratford Road ground and the pitch at Oversley Green

Congratulations to everyone who was nominated for an award. 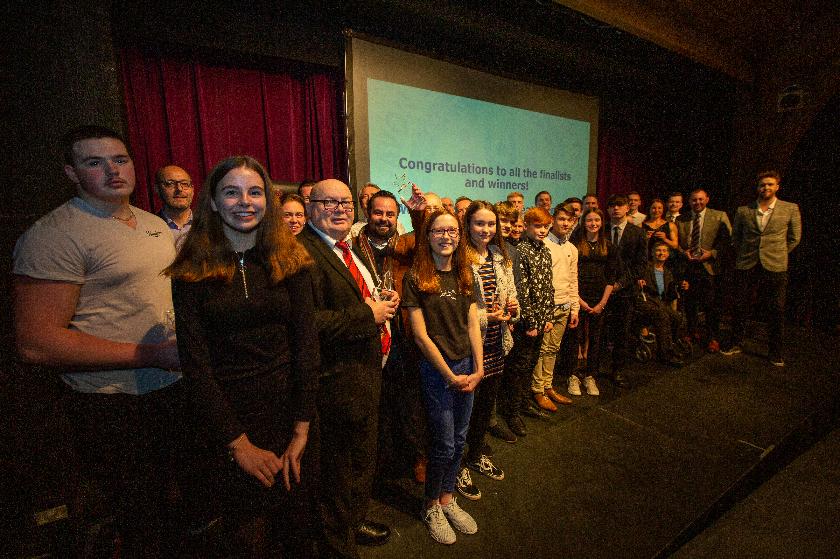