Stratford-on-Avon District Council's Cabinet has today, Monday 8 July, agreed to retain and enhance the UBUS service and also agreed funding for the next five years.

UBUS is a service for residents of all ages, who struggle for transport to get to local destinations on weekdays between 9.30am and 2.30pm. The service collects people from their home and takes them to an agreed destination.

Cllr Jo Barker, People Portfolio says: "Social and rural isolation are major local challenges given the rurality of Stratford District. The UBUS plays an important role and lifeline for many to help combat this.

"We know - and evidence shows - how important this service is for users, with 98% very satisfied / satisfied with the helpfulness and attitude of the driver.  In the latest Citizen's Panel UBUS was the second most highly supported District project."

To support The Cabinet's decision to retain and enhance the UBUS service Warwickshire County Council are contributing additional funding by diverting current funds from other services.

This contribution will subsidise the extension of the service to include:

Cllr Barker continued: "By allocating resources in a different way, the County Council has been able to increase its funding contribution for the UBUS service. This has enabled the District Council to maintain its current funding level, while at the same time residents can benefit from an enhanced service. A winning combination all round!"

The UBUS service has been operating since 2014.

UBUS is a service for residents of all ages, who struggle for transport to get to local destinations on weekdays between 9.30am and 2.30pm. The service collects people from their home and takes them to an agreed destination.

UBUS is a community transport service that operates on a dial-a-bus basis. The service is for all residents of any age, wherever they may live in the district, who are stuck for transport to travel locally on weekdays between 9.30am and 2.30pm.

UBUS vehicles are fitted with ramps or tail lifts to ensure they are as easy as possible for everyone to access including wheelchair users. 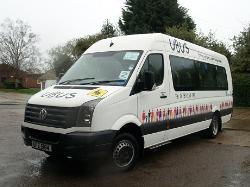 Stratford-on-Avon District Council contributes £109,000 a year for the service.