A local dog kennel owner has been fined following a successful prosecution by Stratford-on-Avon District Council's Licensing team for a breach of licence conditions.

Ms Kay Talbot of Meadow Kennels, Preston-on-Stour, who has been licensed since 2015, pleaded guilty to the offence at Nuneaton Magistrates' Court on Tuesday 2 April.

A Licensing Officer from the District Council visited Meadow Kennels, Atherstone Airfield, Preston-on-Stour last August following a complaint from a member of the public.

The premises are licensed to keep a maximum of 30 dogs. On inspection the officer found a number of dogs sharing kennels without the owners' consent and dogs being kept within passage ways of kennel blocks. Paperwork and information for dogs housed could also not be found.

A total of 54 dogs were found at the premises, contrary to the licence conditions which state that the number of animals accommodated at the establishment at any one time shall not exceed 30 dogs.

Ms Talbot was issued with a £40 fine and a £30 victim surcharge for the offence.

Since the date of the offence the Animal Welfare (Licensing of Activities Involving Animals) (England) Regulations 2018 have come in.

The new regulations, which came into effect on 1 October 2018, seek to further control the following activities:

The new regulations now include a scoring system which determines the length of licence issued to a premise.

The new scoring system brought in by DEFRA is to ensure consistency in implementation and operation of the licensing system by local authorities, and to ensure that consumers can be confident that the star rating applied to businesses is an accurate reflection of both their risk level and the animal welfare standards that they adopt.

The scoring matrix can be found below. 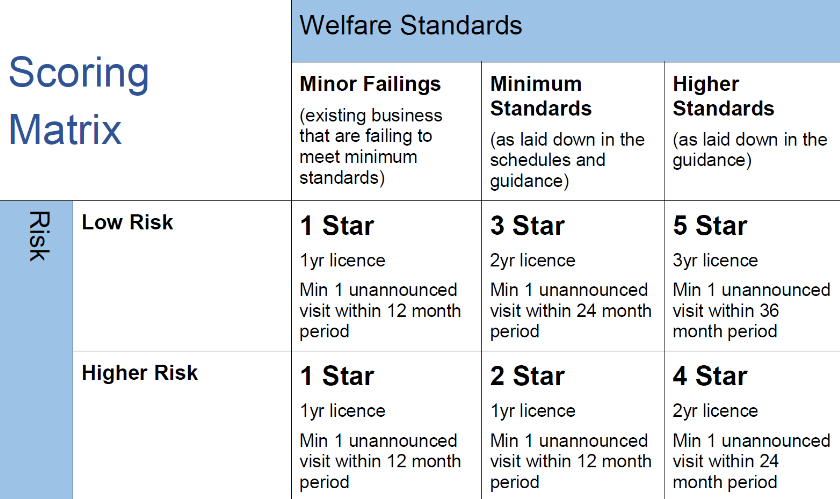 Under the new regulations the local authority now has the power to vary, suspend or revoke a licence. Normally seven working days' notice would be given unless the reason is to protect the welfare of an animal, in which case the decision can take immediate effect.

Part of the new regulations stipulates that all premises must now have a contingency plan for such a scenario or emergency which might require animals to be either rehoused or sent home.

It is an offence for a person, without lawful authority or excuse, to breach a licence's conditions or obstruct an inspector in the exercise of their powers. Such offences are punishable by a fine.

Anyone who carries on any of the licensable activities without a licence is liable to imprisonment for a term of up to six months, a fine or both; section 30 of the Animal Welfare Act 2006 allows for local authorities to prosecute for any offences under that Act.

Meadow Kennels has since applied under the new regulations and have been issued a licence with a 1 star rating.