Performers from across the globe will be descending on Stratford-upon-Avon to battle it out to be crowned the winner of the prestigious National Living Statue Championships.

Living statue artists from Denmark, Spain, Portugal, Greece, the Netherlands, Ukraine and all over the UK will be travelling to the tourist destination for the contest following an unprecedented number of applications.

The championship, which is set to take place on Saturday 27 April and Sunday 28 April in Bancroft Gardens, has been forced to establish a waiting list following a massive amount of interest from artists worldwide.

The competition is part of Shakespeare's Celebrations, which sees locals and international tourists gathering in Shakespeare's hometown to celebrate his legacy with the traditional birthday celebrations parade.

Dermot McGillicuddy, Director of LSD Promotions, which stages the championship on behalf of the town and district councils, said: "We have been completely blown away by the number of applications for this year's competition following the popularity of the inaugural championship last year.

"There's such a range of people competing this year, one as young as seven with the oldest competitor being 65 - and the only living statue to exist in Denmark is set to join us too.

"Only the best of the best will get through; in total we have had three times more applicants than we can actually accommodate, so it will be a very tough process to narrow it down to the final competitors.

"Around eight artists who performed last year will be returning as completely new characters, so they will now be entirely unrecognisable!

"We know that the competition will be fierce and we are confident that there will be a real treat in store for the hundreds of people who flock to Stratford-upon-Avon for Shakespeare's Celebrations.

"Alongside their performances on the Saturday and Sunday, some of the statues will be taking part in our Statues by Night event on Friday 26 April at 8pm as a practice ahead of the competition across the weekend. 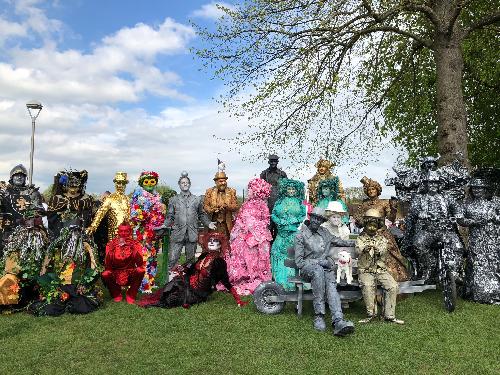 "At the inaugural event in 2018 (pictured right), people expressed disappointment that they couldn't register a vote, so following this feedback we have decided that it will be up to the public to choose this year's winner via our new app."

Last year's winners include 55-year-old Matt Walters from Sussex, who will be returning to defend his title, and 15-year-old Wouter Spijk from the Netherlands, who won the junior prize.

Sarah Summers, Town Clerk of Stratford-upon-Avon Town Council, says: "The town and district councils were delighted with the way the town embraced the first Living Statue Championships in 2018 and we are completely confident that this year's competition is a spectacle not to be missed. It will be bigger and better than ever.

"The winners will be announced at 4pm on the Sunday at the Bancroft Basin, so we hope that people will stay in town for this.

"There are lots of other attractions on offer, including an artisan market, food court, workshops and street entertainment, which will take place throughout the weekend.

"All these additional attractions complement the traditional elements of Shakespeare's Celebrations, which include the annual birthday parade and flag unfurling ceremony.

"If you would like to take part in the parade, there is still time to register your interest, so please contact Stratford-upon-Avon Town Council and help us celebrate Shakespeare's Birthday in style in his own hometown."

Cllr Christopher Kettle, Chairman of Stratford-on-Avon District Council, says: "The UK's first Living Statue Championship was an exciting key new feature of last year's Shakespeare Birthday Celebrations. The event attracted so much international talent from across the globe and it was wonderful having the opportunity to see so many world-class artists in one place.

"This event on such an important weekend underpins Stratford-upon-Avon's international reputation as a globally renowned tourist destination and the annual Shakespeare Birthday Celebrations are a fantastic opportunity for people from all walks of life to engage with the life of history's most celebrated playwright and poet."